A community in pictures for the future generations 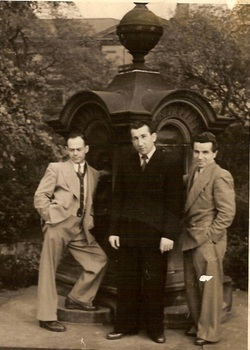 Josef Kuzio (on the right in the picture, with his friends Mr Macyk and Mr Tsalyk) was barely in his 20s when he arrived in Calderdale in 1949 to build a new life. He spoke no English and he was uncertain as to what the future held.

But he was not alone. Many other Ukrainians made the same journey which eventually brought them to Halifax, where gradually they built a strong and vibrant community.

Since his arrival 60 years ago, Josef, now 82 has kept a photographic record of life here, documenting the community as it has flourished and grown to become a vital part of the town.

And in and among the events of day-to-day living are highlights such as visits by former presidents and American film companies.

"The albums span the history of the Ukrainian community in Halifax and I hope that the pictures will serve as a testimony to those who are no longer with us, a vivid memory to those still living and a keepsake for future generations," says Josef.

Josef admits he is thrilled to see his pictures collected together and hopes now that they will be of interest to his fellow Ukrainians and their families who have made Calderdale their home.

"I just kept taking these pictures as things were happening. I don't think you realise at the time that they are significant but it is important to record these events. It is part of our social history," he says.

Josef recalls arriving in the UK in September 1948, spending a short time at a camp for displaced persons in Hampshire before moving to York and eventually Halifax.

One of his earliest photographs of life in Calderdale was snapped outside a hostel in Hipperholme in 1949.

Since then he has recorded his own family life as well as that of friends.

Another special photograph in the album is the installation of Taras as head of Nato, Ukraine in 1998. The same year another photograph records the visit of former president of the Ukraine, Leonid Kravchuk to the Kuzios' home.

"And of course we celebrated the Ukraine winning independence in 1991," says Josef who spent much of his working life in Calderdale's mills and factories, including Mackintosh's.

Celebrations have been captured by Josef and his camera, including in Edinburgh in 2007 after the Scotland Ukraine football match, as well as numerous weddings going back to the 1940s.

"Just look at me there," says Josef, laughing, pointing out an early picture of himself in 1949, rollerskating at Sunny Vale Pleasure Gardens in Hipperholme.

The photographic collections have enabled Josef to recall many poignant moments including in 2007 when he returned to Berlin.

"My father used to help people cross from East Germany to West Germany and we managed, to find the exact spot. It was incredible," says Ivan.

Ukrainian traditions are captured for posterity, including youth rallies, choir performances and concerts staged by the Veselka dance group.

"When I first came to Halifax, I thought that one day I might go back to the Ukraine but I have only made visits. My life has been here, along with many other Ukrainians and these photographs show that," says Josef.

"I'm indebted to my father who began this collection and indeed to all those who contributed in any way to this everlasting reminder of the work of the community and its people," adds Ivan.

Ivan would like to compile a third value and would like members of the Ukrainian community with old photographs to get in touch. He can be contacted through the facebook page: halifaxukrainians.

The Ukrainian Community in Halifax albums, volume one and two, are available at Calderdale Library, Halifax as well as from Amazon. See our "links" page for more details

This article was first published in the newspaper "Evening Courier", Halifax, 25/08/2009