The Holodomor ( literal translation Killing by hunger) was a man-made famine orchestrated by soviet Russia and still denied by the current Russian government. The joint statement at the United nations in 2003 has defined the famine as the result of actions and policies of the totalitarian regime that caused the deaths of millions of Ukrainians. Grain was confiscated from peasants; laws were enacted that anyone caught taking grain from a field was to be executed.During the famine up to 7 million may have died in the space of one year.

More recently, Timothy Snyder, Professor of History at Yale University  asserts that in 1933 "Joseph Stalin was deliberately starving Ukraine" through a "heartless campaign of requisitions that began Europe's era of mass killing".(Bloodlands) his groundbreaking new book about Hitler's and Stalin's near-simultaneous genocides.

"In the long march of history, progress is being made," the Kyiv Post's editors in 2008 wrote. "Kremlin leaders in the early 20th century starved Ukrainian men, women and children to death. Their successors in the 21st century, "through the control of gas", merely threaten to freeze Ukrainians to death."
For more information follow this link:
http://www.ciuspress.com/catalogue/history/324/the-holodomor-reader
In addition this link is very interesting of the Welsh journalist who reported the famine:
http://www.walesonline.co.uk/news/wales-news/gareth-jones-hailed-ukraine-famine-4571451


150th anniversary  (Ban of the Ukrainian Language and Culture)

(The caption in the picture reads:I found out my nephew voted for the Party of Regions" so I signed over the house to the cat")

The passing of a controversial bill in 2012,  by the pro Russian Party of Regions,  led a number of Russified areas in Ukraine to claim Russian as their official first language. Opposition parties led by Klitschko and Tymoshenko  see this action and the new government bill promoting "regionalisation" as a potential threat to Ukrainian sovereignty and its 20 years of independence since the break-up of the Soviet Union.  The leader of the Ukrainian Orthodox Church, Patriarch Filaret, stated,"Russia wants to destroy the language in order to destroy the Ukrainian state".
For more details on this read: http://www.worldaffairsjournal.org/blog/alexander-j-motyl/soviet-style-imperialism-ukrainian-language


1025th anniversary of Christianity in Ukraine 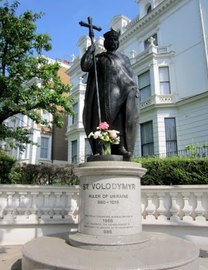 Prince Volodymyr  the Great was the figure who officially brought Christianity to modern-day Ukraine. In 988 A.D., Prince Volodymyr was baptized and then instigated Christianity as the state religion of the territory of Ukraine, then known as Kyiv  Rus. Rus was the name given to the Norsemen who travelled down the rivers from Scandinavia and settled in Kyiv. The neighbour of Ukraine at that time was Muscovy who took some 300 years to follow  Kyiv Rus to adopt Christianity as their official religion. Interestingly, some 800 years later in the 18th Century, Muscovy changed its name to Russia to claim this historical legacy. On hearing this Voltaire wrote to Catherine of Russia and said Europe only has one Rus and that is centred on Kyiv.

The statue is of Prince Volodymyr in London, UK