Ivan  Franko was a Ukrainian poet, writer, social and literary critic, journalist, interpreter, economist, political activist, doctor of philosophy, ethnographer, the author of the first detective novels and modern poetry in the Ukrainian

Second Anniversary of Ukraine's Revolution of Dignity
This year the people of Ukraine honour the memory of their Revolution of Dignity and those who gave their lives to build a more just, democratic, and European Ukraine. They braved sniper fire and three months in the bitter cold, and Ukraine got a second chance for freedom, justice, and a government that serves the people.
​
Ukraine’s reformers have made substantial progress, but much more remains to be done. Ukraine’s leaders need to honor the memory of the Maidan by working together, accelerating reform, and respecting the will of the Ukrainian people who want progress. That means fulfilling the conditions of Ukraine’s IMF program, rooting out corruption, and ending the oligarchic grip on politics and the economy. The Ukrainian people demand change and they deserve it.

Ukraine is holding commemorations to mark the 30th anniversary of the worst nuclear disaster in history. The meltdown at the Chernobyl plant sent a cloud of radioactive fallout into Ukraine, Belarus and over a large portion of Europe. A vast rural region became uninhabitable, including the town of Pripyat, which remains abandoned. 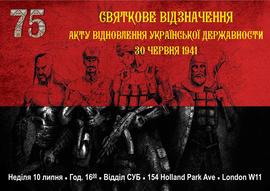 75 years ago in Lviv on the 30 June 1941 a provisional Ukrainian Government under the leadership of Yaroslav Stetsko proclaimed the re-establishment of the Ukrainian state. The events that followed led to the formation of the Ukrainian Insurgent Army and a bitter struggle against both Nazi Germany and Stalinist Russia.